Where We Have Been Shapes Who We Are Today The York Catholic journey began in 1927 when initial plans were made for the private high school. Two years later in 1929, the first class of three female students received their diplomas. Since those first three graduates, the YC story has continued to grow and evolve along with the communities we serve. Our history is interwoven with the life stories of the faculty, staff, students and families who walked the path of growth and change alongside us. While so many things are different from that first class of 1929, what has remained unchanged is a steadfast commitment to faith and a focus on providing exceptional student experiences that prepare our young adults for success in college and beyond.

We invite you to learn more about who we are and how our history has shaped the dynamic educational experiences of today’s students. If you are interested in starting a conversation to learn more, get in touch. We would love the opportunity to connect.

Guided by a Christian moral compass, we educate our students in an atmosphere of faith, family, and mutual respect, preparing them to serve the global community.

To be the school of choice for secondary education in York County.

A History of YC

Check out YC’s history to get a glimpse at how where we have been has shaped who we are today.

Check It Out
Our Seal

The Legacy of the YC Seal

Discover the deep meaning behind the elements the school seal includes.

YC History: A Legacy of Service 1927
York Catholic High School was founded to serve the Catholic community of the York Deanery, York County, and nearby areas.

1929
Originally named St. Mary’s High School, and located on South George Street in York, the school received full State recognition by 1929 and was renamed York Catholic. Three Sisters of Saint Francis made up the faculty and on June 11, 1929, three females received their diplomas as the first graduating class of York Catholic High School.

1931
Athletic teams were introduced and have long been an integral part of York Catholic’s history. The teams were born in humble beginnings:  they wore hand-me-down blue uniforms from Mount St. Mary’s College. The original nickname for YC teams was “Dukes.”  School historians note that because of strong anti-Catholic sentiments at the time, many games involved fights where players had to “put up their dukes,” and numerous games were suspended mid-contest and never completed because of the brawls.

Additional space was needed to accommodate the increased enrollment of 309 and the high school was moved to West King Street.

1948
Students sang their Alma Mater, “Fondly, We Hail Thee,” for the first time.  Father Fitzpatrick, the principal at the time, composed the music and Sister Maria Leona, I.H.M. and Sister Catherine Gertrude, S.S.J., wrote the lyrics. That same year, YC won its first state championship in boys’ basketball. In the early 50s, the athletic teams’ nickname was changed to the “Fighting Irish.”

1954
As enrollment continued to grow, it soon became evident that York Catholic would have to expand even further or build to meet the large influx of students. Catholic authorities purchased land adjoining Memorial Park as the site for the new high school.

1957
Ground was broken on the new school facility.

Student fund raising allowed the construction of a school chapel and students and faculty now had a dedicated space for Mass, reflection, and spiritual services.

1978
During York Catholic’s Golden Anniversary year, the Fighting Irish boys’ basketball team won the state championship on St. Patrick’s Day. The following year, they repeated the title and the girls’ team also won the state championship. This was the first time one school won both titles in the same year in the history of the Pennsylvania Interscholastic Athletic Association.

1986
The first issue of “Greensleeves” was printed, a publication that continues to keep alumni up to date on their alma mater and their classmates, and donors and friends informed of all things YC.

1987
The boys’ basketball team completed an undefeated season in 1987 with yet another state championship.

1989
Major renovations to parts of the building provided a new chapel, an art room, an attendance office, a computer room, and a career/guidance room.

1990
The boys’ basketball team won another state championship, and the Gaelic Club was established to recognize major contributors to the school.

1992
The Junior High program for grades 7 and 8 began and the building expanded to accommodate a weight room and storage areas. The football field was created on campus and the library was computerized.

2000-2017
With the turn of the century, many upgrades were made to the building including remodeling the auditorium and lobby, refurbishing the cafeteria, replacing the windows with energy-saving glass, building a prayer garden dedicated to Our Lady of Guadalupe, and creating a peaceful prayer grotto dedicated to the Blessed Mother.

The athletic teams continued to win numerous division, league, district, and state championships in multiple sports. The girls’ basketball made state history by winning 10 consecutive District titles and competed in the state championship 7 times since 2006, winning gold in 3 of those trips.

2019
Classrooms were updated and accommodated with air conditioning, a turf field was placed at the stadium, and an elevator was installed.

2020
In 2020, Chromebooks were provided to each student in grades 7-12.  In March of that year, the state of Pennsylvania closed all schools on March 13 in response to the COVID-19 pandemic.  York Catholic adapted by immediately offering interactive online virtual distance learning with teachers instructing from their homes to students watching live online.  This continued through the end of May to close out the 2019-20 school year.  During the summer of 2020, science labs were renovated, the chapel was relocated back to the main floor, and a lobby-level student center was created. Fundraising for the 2nd Phase of the Capital Campaign began to include renovation of the Junior High classrooms, relocation of the Grotto, the addition of a Rosary Walk, and installation of new bleachers in the stadium.

2021
In 2020-21, with vaccines not yet available for all students, families were given the option to have students attend class in person on campus or via online though video cameras in each classroom.  To keep in line with other schools within the York community, the Junior High was renamed York Catholic Middle School beginning with the 2021-22 school year.

2022
Phase II of the Capital Campaign continued with renovations to the Middle School classrooms and the installation of a new press box and bleachers at the stadium.  Signage was also placed throughout the campus.

2023
Phase II of the Capital Campaign ended with the relocation of the Grotto to a more prominent space in the front of campus joining the high school and the middle school.  A Rosary Walk was added to complete the spiritual atmosphere. 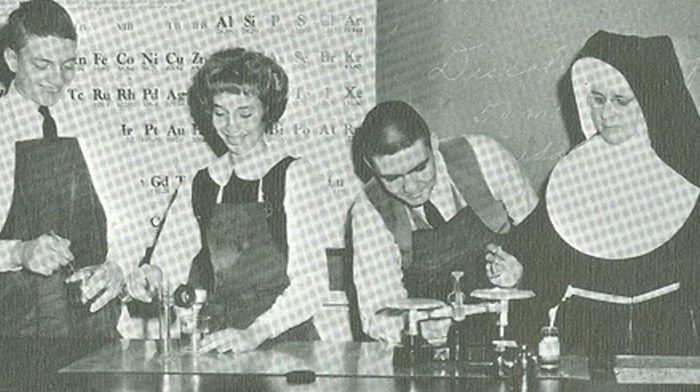 Our school seal symbolizes our ideals, what we are, and the means by which we hope to reach our goals.

“In The Cross Salvation”

The cross is a symbol of our Catholicity by which we hope to receive the crown.

The seven points of the crown remind us of the seven joys and seven sorrows of Our Lady. Through her we hope to reach our destiny.

A Motto and Monogram of Faith

With implicit faith in her power, our motto, “Maria Impende Juvamen” –“O Mary, bestow your aid” is an echo of St. Bernard’s Memorare, while the monogram, M. I., Maria Immaculata, signifies the chosen title of our Patroness.

The Symbols of the Shield

Besides Our Lady’s monogram, the shield, which is the symbol of the battle of righteousness, bears several other significant designs. The background is made up of lines and dots, which in heraldry represent green and gold respectively, our school colors.

The eight stars that support the seal represent those who make Catholic education possible for us – the parishes of the York Deanery.

By reflecting on who we are, we have the opportunity to shape who we will become. At YC, a reverence to learning from the past meets a focus on continually driving ahead with a view of the future. If you are interested in learning more about the YC history, reach out. We would love to share additional information and answer your questions.

We would love the opportunity to show you around, answer your questions and share more information about York Catholic.
Request Info